© 2022 David Bate. All rights reserved. Trademarks and brands presented are the property of their respective owners.
Home Amateur Radio 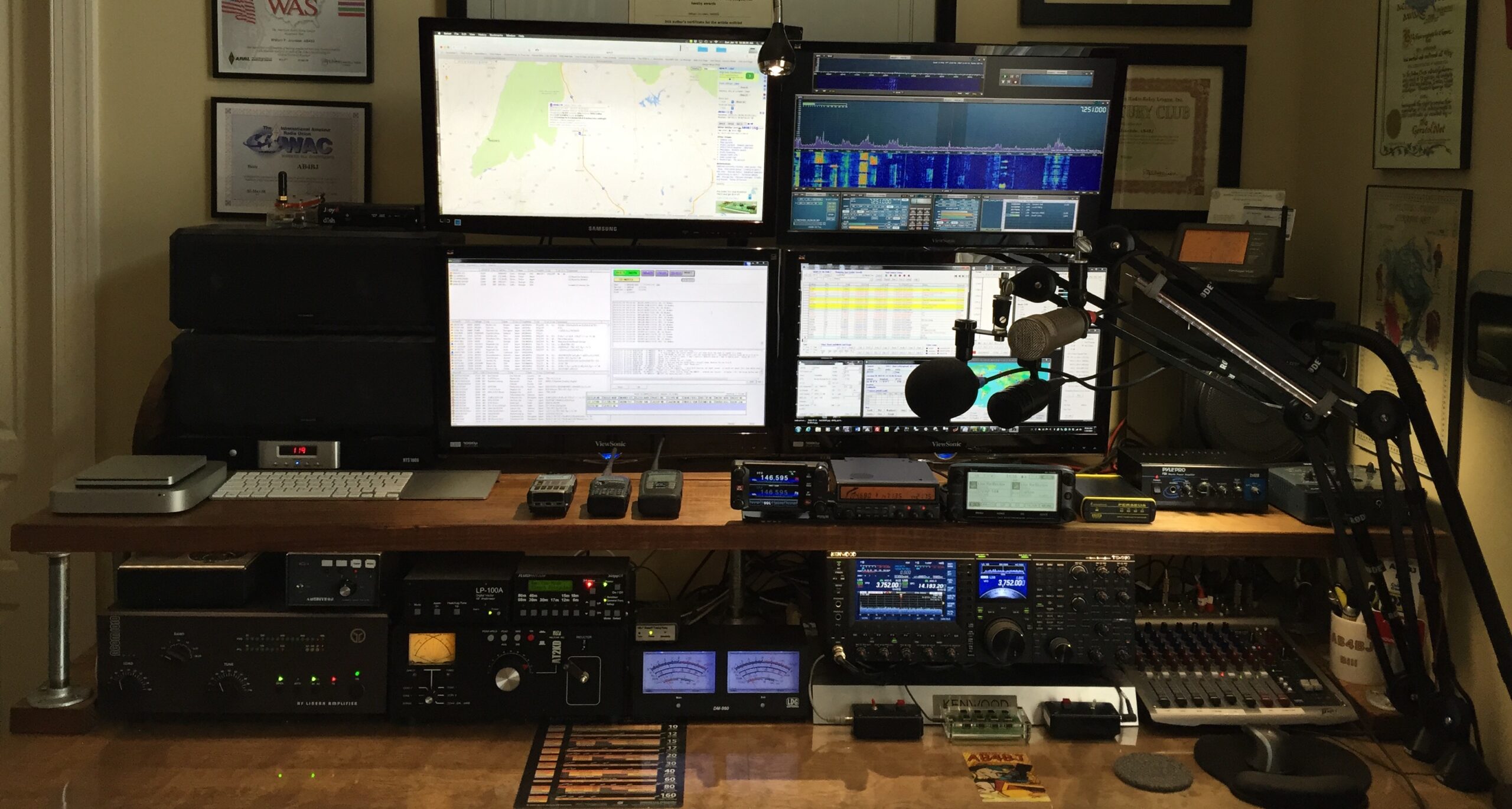 What is Amateur Radio?

A teen in Oshawa makes friends over the airwaves with a ham in California. An aircraft engineer in Washington participates in an annual contest and exchanges call signs with hams in 100 countries during a single weekend. In Florida, volunteers pass health and welfare messages in the aftermath of a hurricane. This mix of fun, public service, friendship and convenience is the main feature of amateur radio. The true origin of the term “ham” seems to have been lost, but there are several theories. It may simply be a shortcut way of saying the first syllable of amateur radio, or it may have originally been used as an insult. Hams start out in amateur radio for many reasons, but they all have in common a basic knowledge of radio technology, regulations and operating principles.

Amateur radio operation is coordinated by the International Telecommunication Union (ITU) and licensed by the individual national governments that regulate technical and operational characteristics of transmissions and issue individual stations with an identifying call sign. Prospective amateur operators are tested for their understanding of key concepts in electronics and the host government’s radio regulations. Amateurs use a variety of voice, text, image, and data communications modes and have access to frequency allocations throughout the RF spectrum to enable communication across a city, region, country, continent, the world, or even into space. According to an estimate made in 2011, two million people throughout the world are regularly involved with amateur radio.

The origins of amateur radio can be traced to the late 19th century though amateur radio, as practiced today, did not begin until the early 20th century. The first listing of amateur radio stations is contained in the First Annual Official Wireless Blue Book of the Wireless Association of America in 1909. This first radio callbook lists wireless telegraph stations in Canada and the United States, including 89 amateur radio stations. As with radio in general, the birth of amateur radio was strongly associated with various amateur experimenters and hobbyists. Throughout its history, amateur radio enthusiasts have made significant contributions to science, engineering, industry, and social services. Research by amateur radio operators has founded new industries, built economies, empowered nations, and saved lives in times of emergency.

Amateur radio is a hobby with many facets and thus attracts practitioners with a wide range of interests. Many amateurs begin with a fascination of radio communication and then combine other personal interests to make pursuit of the hobby rewarding. Some of the focal area’s amateurs pursue include radio contesting, radio propagation study, public service communication, technical experimentation, and computer networking.

Amateur radio is a worldwide group of people who communicate with each other over a wide frequency spectrum using many different types of wireless transmitting modes.

Often, younger hams get a chance to meet other hams of various ages and professions. For example, Field Day is an annual event that encourages people to get on the air, perhaps with a family member or a neighbor who is a licensed amateur radio operator. The frequent networking often helps teens when they are making career or education choices and wish to get some advice (from professionals in many technical fields) that maybe mom, dad or the guidance counselor may not be able to give.

Today, there are approximately 66,500 amateur radio operators in Canada, and more than 2.5 million around the world. To find out how to get started and who to contact in your area, call or write the non-profit organization:

Hams use a variety of frequencies for communications. Non-hams can “listen in” via their own receivers or scanners. Hams are able to use many frequency bands across the radio spectrum — these frequencies are allocated by the Industry Canada for amateur use. Hams may operate from just above the AM broadcast band to the microwave region, in the gigahertz range. Many ham bands are found in the frequency range that goes from above the AM radio band (1.6 MHz) to just above the citizens band (27 MHz). During daylight, 15 to 27 MHz is a good band for long-distance communications.

At night, the band from 1.6 to 15 MHz is good for long-distance communications. These bands are often referred to historically as short-wave bands (as in “short-wave radio”). Unlike frequencies used by FM radio stations and TV stations, which are line-of-sight and therefore limited to 40 or 50 miles, short-waves “bounce” off the ionosphere from the transmitter to the receiver’s antenna. The higher the frequency is, the “shorter” the wavelength is.

Some ham radio operators use the very reliable Morse code, while others use voice. Morse code signals (beeps) often get through when voice transmissions cannot. There are also very many digital modes as well, and hams use radio modems to communicate in various networks.

Although a ham radio does broadcast in all directions, hams generally do not use their radios in a broadcast kind of way as a disk jockey would at a radio station. In normal AM or FM radio, one disk jockey transmits and thousands of people listen. Hams, on the other hand, conduct two-way conversations, often with another ham or with a group of hams in an informal roundtable. The roundtable of hams may be in the same town, county, state, country or continent or may consist of a mix of countries, depending on the frequency and the time of the day. Hams also participate in networks, often called nets, at predetermined times and frequencies to exchange third-party messages. In the case of disasters, hams exchange health and welfare information with other hams. Some hams use radioteletype, (RTTY) with computer screens replacing the noisy teletype machines of the past.

Many hams get their start on VHF FM, using battery-operated hand-held transceivers set to transmit on one frequency and receive on another frequency. They use FM repeaters, set up and supported by local radio clubs. These repeaters borrow antenna space from TV-station-tower owners on top of mountains and high buildings to receive and re-broadcast signals to extend the range.

The FM repeater receives one signal at a time and simultaneously rebroadcasts it on another frequency using many more watts of power than available from a small hand-held radio. This extends the range of the hand-held radio from a few miles to tens or hundreds of miles! The whole country has these repeaters! (Listen to one with a radio scanner to learn a lot about ham radio.) When a ham is traveling, he or she can find a repeater to use (great for tips on local restaurants), and carry on a nice, static-free, FM-radio-quality conversation via a radio that fits in the shirt pocket or purse. Linked repeaters allow fun wireless communications across an entire state with a hand-held radio.

Repeaters use common transmit and receive frequency pairs. The frequency pairs in use are informally assigned by groups of hams so that any frequency pair in use is far enough from another repeater so as not to cause unwanted interference.

Natural disasters like hurricanes or tornadoes disrupt normal telephone and cell phone systems. Ham radio operators pitch in to help with emergency communications, and you will often hear about them on news reports.

On the International Space Station, each member of the crew usually has an amateur radio operator’s license. During breaks, astronauts would chat with other hams for a few minutes, often at schools while in orbit overhead! VHF transmissions have a limit to line-of-sight communications and normally do not travel over the horizon, so a conversation is limited to the time when the shuttle is overhead. The International Space Station (ARISS) uses 145.800 MHz for conversations.

You need an easy-to-earn license to transmit on an amateur radio frequency. License tests cover electronics theory and amateur radio rules and regulations. Study guides are readily available. There is no age restriction. Each country has its own licensing arrangements. Many countries share many of the same frequency bands with hams in Canada and the United States. Each license class allows operation in certain bands, using certain modes.

There are frequent hamfests, or ham radio flea markets, in many areas. Hamfests are the best place to meet hams, buy equipment, and take your license test. It’s a great way to find some terrific deals on used equipment. You will also find computer parts at hamfests. It is relatively inexpensive to get into amateur radio if you learn how to shop for used equipment with the aid of someone at a localradio club. Think of a hamfest as a real-time, in-person ham radio display like that found at eBay — but you don’t have to bid against others!

Look for a transceiver with a built-in general coverage receiver. That way, you get the versatility of two hobbies: ham radio and short-wave listening.

Each May, the world’s largest ham radio convention is held in Dayton, Ohio.

Listen in on the Amateur Radio Frequency Bands (Canada) via a radio scanner or a short-wave receiver. Be sure any short-wave receiver you buy is capable of receiving single sideband (SSB), used for voice communications on the short-wave bands. On any scanner, you will hear local ham operators using repeaters in the frequency range of 144 to 148 MHz.

Most important: Talk to a ham! We love to talk about experiences in amateur radio and are known for being “Elmers” (teachers) for those new to amateur radio. When you hear a ham’s call sign on your receiver or scanner, look up the ham’s call sign to find a way to contact that ham!

Who knows, maybe someday your next ham radio contact may be a music or TV personality!