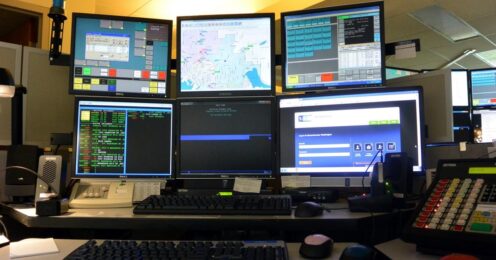 Project 25 (P25 or APCO-25) is a suite of standards for digital mobile radio communications designed for use by public safety organizations in North America. P25 radios are a direct replacement for analog UHF ( example FM) radios but add the ability to transfer data as well as voice, allowing for a more natural implementation of encryption or messaging. P25 radios are commonly implemented by dispatch organizations, such as police, fire, Ambulance and Emergency Rescue Service, using vehicle-mounted radios combined with walkie-talkie handheld use.

Starting around 2012, products became available with the newer phase 2 modulation protocol, the older protocol known as P25 became P25 phase 1. P25 phase 2 products utilise the more advanced AMBE2+ vocoder, which allows audio to pass through a more compressed bitstream and provides two TDMA voice channels in the same RF bandwidth (12.5 kHz) that phase 1 can only provide one voice channel. The two protocols are not compatible. However, P25 Phase 2 infrastructure can provide a “dynamic transcoder” feature that translates between Phase 1 and Phase 2 as needed. In addition to this, phase 2 radios are backwards compatible with phase 1 modulation and analog FM modulation, per the standard. On the other hand, EU area created the standard for Terrestrial Trunked Radio similar to Project 25.

P25 fills a similar role as TETRA or DMR protocols.

Public safety radios have been upgraded from analog FM to digital since the 1990s because of an increased use of data on radio systems for such features as GPS location, trunking, text messaging, metering, and encryption.

Various user protocols and different public safety radio spectrum made it difficult for Public Safety agencies to achieve interoperability and widespread acceptance. However, lessons learned during disasters the United States faced in the past decades have forced agencies to assess their requirements during a disaster when basic infrastructure has failed. To meet the growing demands of public safety digital radio communication, the United States Federal Communications Commission (FCC) at the direction of the United States Congress, they initiated a 1988 inquiry for recommendations from users and manufacturers to improve existing communication systems. Based on the recommendations, to find solutions that best serve the needs of public safety management, in October 1989 APCO Project 25 came into existence in a coalition with:

A steering committee consisting of representatives from the above-mentioned agencies along with FPIC (Department of Homeland Security Federal Partnership for Interoperable Communication), Coast Guard and the Department of Commerce’s National Institute of Standards and Technology (NIST), Office of Law Enforcement Standards was established to decide the priorities and scope of technical development of P25.

Interoperable emergency communication is integral to initial response, public health, community safety, national security and economic stability. Of all the problems experienced during disaster events, one of the most serious, is poor communication due to lack of appropriate and efficient means to collect, process and timely transmit important information. In some cases, radio communication systems are incompatible and inoperable not just within a jurisdiction but within departments or agencies in the same community. Non-operability occurs due to use of outdated equipment, limited availability of radio frequencies, isolated or independent planning, lack of coordination, and cooperation, between agencies, community priorities competing for resources, funding and ownership, and control of communications systems. Recognizing and understanding this need, Project 25 (P25) was initiated collaboratively by public safety agencies and manufacturers to address the issue with emergency communication systems. P25 is a collaborative project to ensure that two-way radios are inter-operable. The goal of P25 is to enable public safety responders to communicate with each other and, thus, achieve enhanced coordination, timely response, and efficient and effective use of communications equipment.

P25 was established to address the need for common digital public safety radio communications standards for first-responders and homeland security/emergency response professionals. The Telecommunications Industry Association’s TR-8 engineering committee facilitates such work through its role as an ANSI-accredited standards development organization (SDO) and has published the P25 suite of standards as the TIA-102 series of documents, which now include 49 separate parts on Land Mobile Radio and TDMA implementations of the technology for public safety.

Project 25 (P25) is a set of standards produced through the joint efforts of the Association of Public Safety Communications Officials International (APCO), the National Association of State Telecommunications Directors (NASTD), selected federal agencies and the National Communications System (NCS), and standardized under the Telecommunications Industry Association (TIA)… The P25 suite of standards involves digital Land Mobile Radio (LMR) services for local, state/provincial and national (federal) public safety organizations and agencies…P25 is applicable to LMR equipment authorized or licensed, in the U.S., under NTIA or FCC rules and regulations.Although developed primarily for North American public safety services, P25 technology and products are not limited to public safety alone and have also been selected and deployed in other private system application, worldwide.

P25 standards use the proprietary Improved Multi-Band Excitation (IMBE) and Advanced Multi-Band Excitation (AMBE+2) voice codecs which were designed by Digital Voice Systems, Inc. to encode/decode the analog audio signals. It is rumored that the licensing cost for the voice-codecs that are used in P25 standard devices is the main reason that the cost of P25 compatible devices is so high.[10]

P25 may be used in “talk around” mode without any intervening equipment between two radios, in conventional mode where two radios communicate through a repeater or base station without trunking or in a trunked mode where traffic is automatically assigned to one or more voice channels by a Repeater or Base Station.

These systems involve standardized service and facility specifications, ensuring that any manufacturers’ compliant subscriber radio has access to the services described in such specifications. Abilities include backward compatibility and interoperability with other systems, across system boundaries, and regardless of system infrastructure. In addition, the P25 suite of standards provides an open interface to the radio frequency (RF) subsystem to facilitate interlinking of different vendors’ systems.

To improve spectrum utilization, P25 Phase 2 was developed for trunking systems using a 2-slot TDMA scheme and is now required for all new trunking systems in the 700 MHz band. Phase 2 uses the AMBE+2 voice codec to reduce the needed bitrate so that one voice channel will only require 6,000 bits per second (including error correction and signalling). Phase 2 is not backwards compatible with Phase 1 (due to the TDMA vs FDMA operation), although TDMA radios and systems are capable of operating in Phase 1 FDMA when required. A subscriber radio cannot utilize TDMA transmissions without a time source, therefore direct radio to radio communications (talkaround) resorts to FDMA. And subscriber radios can also resort to narrow-band FM being the least common denominator between almost any two way radio. This could make analog narrow-band FM the de facto “interoperability” mode for some time.

Originally the implementation of Phase 2 was planned to use 6.25 kHz of bandwidth per frequency allocation, or FDMA. However it proved more advantageous to utilize existing 12.5 kHz frequency allocations in TDMA mode for a number of reasons. First it eliminated a huge administrative process of reallocating frequency assignments at the FCC for existing Phase 1 users. Second it reduced the amount of base station transmitters as only one transmitter is needed to broadcast two voice slots. And third it allowed subscriber radios to save battery life by only transmitting half the time which also yields the ability for the subscriber radio to listen and respond to system requests between transmissions.

Phase 2 is what is known as 6.25 kHz “bandwidth equivalent” which satisfies an FCC requirement for voice transmissions to occupy less bandwidth. Voice traffic on a Phase 2 system transmits with the full 12.5 kHz per frequency allocation, as a Phase 1 system does, however it does so at a faster data rate of 12 kbit/s allowing two simultaneous voice transmissions. As such subscriber radios also transmit with the full 12.5 kHz, but in an on/off repeating fashion resulting in half the transmission and thus an equivalent of 6.25 kHz per each radio. This is accomplished using the AMBE voice coder that uses half the rate of the Phase 1 IMBE voice coders.

The OPP is the largest deployed police force in Ontario, and the second largest in Canada. The service is responsible for providing policing services throughout the province in areas lacking local police forces. It also provides specialized support to smaller municipal police forces, investigates province-wide and cross-jurisdictional crimes, patrols provincial highways, and is responsible for law enforcement on many of the waterways in the province. The OPP also works with other provincial agencies, including the Ministry of Transportation and Ministry of Natural Resources to enforce highway safety and conservation regulations, respectively. Finally, OPP officers provide security at the Ontario Legislature at Queen’s Park in Toronto. The OPP is one of three provincial police forces in Canada. The others are the Royal Newfoundland Constabulary in Newfoundland and Labrador and the Sûreté du Québec in Quebec.