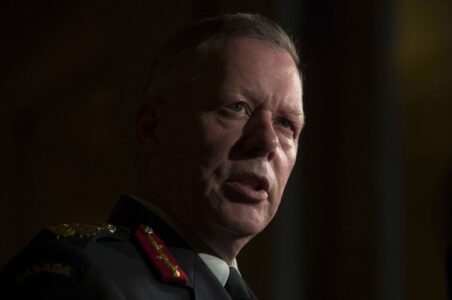 Retired Gen. Jonathan Vance‘s obstruction of justice case will go to trial in May 2023.

Ten days of trial dates were set during a brief, virtual courtroom hearing this morning, three months after military police charged the former chief of the defence staff following a sexual misconduct investigation.

The case is proceeding through the civilian court system after investigators referred it there, citing what they described as “the limitations of the military justice system” in trying Canada’s top military officer.

The former defence chief, who retired from the Canadian Armed Forces in April, has previously denied any wrongdoing.

The Canadian Forces National Investigation Service alleged in court documents that Vance repeatedly contacted a woman identified as “K.B.” in early February and “tried to persuade her to make false statements about their past relationship” to military investigators.

Global News first reported on Feb. 2, 2021, that Vance was facing allegations of inappropriate behaviour from two female subordinates. Military police opened an investigation shortly afterwards and on July 15, laid the charge of obstruction of justice against Vance.

One of the women at the heart of the allegations, Maj. Kellie Brennan, told a parliamentary committee in April that she and Vance had an inappropriate relationship that started in 2001 and continued after he became chief of the defence staff in 2015.

Brennan also told the committee she had recorded Vance telling her on the phone what to tell military police, and had turned those recordings over to the Canadian Forces National Investigation Service.

Global News obtained recordings of three phone conversations between Vance and Maj. Kellie Brennan that took place on Feb. 1. According to these records, Vance told her he had been contacted by Global News about allegations that he said “could be life-changing for both of us in a bad way.”

He told her: “Change your number. Get a new phone.”

“If there is an allegation that we engaged in sexual relations while I was the CDS and you were in the military, that would be devastating. And so it’s a good thing we didn’t,” Vance said to Brennan.

“I just wanted to make certain that you’re clear on our story and that you stick to it.”

Vance said repeatedly through the calls that what he was describing was the truth.

“I will, you know, tell them the story that we’ve gone over today, which is, you know, the truth and — as I described it to you — and then, you know, see where they want to take it,” he told Brennan. “They may investigate, they may not.”

In September, Global News also reported that military police had decided not to pursue any charges against Vance within the military justice system in relation to the allegations of inappropriate behaviour.

When pressed for an explanation as to why the probe into any possible military service violations ended on Aug. 6 with no charges, a military police spokesperson pointed to a recent report from former Supreme Court justice Morris Fish, which warned it was “legally impossible” under the current rules to try someone of Vance’s rank in the military system.

A senior defence source confirmed to Global News the decision to end the investigation without any military code of service charges was specifically tied to Vance’s rank as a four-star general.