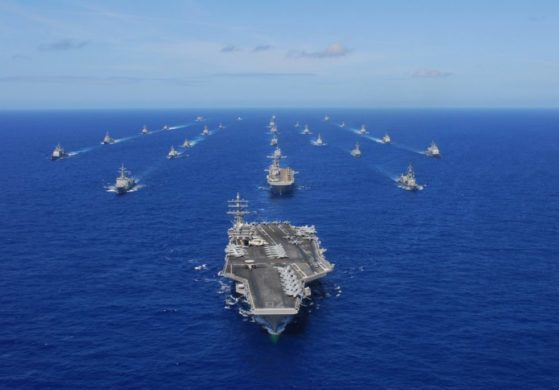 When a group of [US] Navy engineers and software developers took time away from their day jobs in December, they spent the time pursuing a task long considered passe: they became licensed amateur radio operators.

Some 23 employees from Naval Air Warfare Center Weapons Division (NAWCWD) took a week-long class in amateur radio at Point Mugu, California culminating with an FCC amateur radio license test. All passed and are certified at the “technician” level for amateur radio operation [permitted 200 watts on some HF bands, 1500 watts above 30 MHz].

Now, Navy officials say the move may make the workers better at their jobs. The staff gained an understanding of radio frequency (RF) propagation that’s essential to what they do, said Brian Hill, electromagnetic maneuver warfare experimentation lead and collaborative electronic warfare supervisor at NAWCWD.

Hill, who earned his amateur radio license in high school, noticed that while most of his department’s recent hires had degrees in computer science, many had little background in RF theory or operation.

“You can explain antenna patterns and concepts like omni-directional vs directional using Smith charts, but it’s helpful to add a demonstration to really convey the concept,” Hill said. “You can explain modulation as a concept, but for a demo… let them listen to how modulated digital signals with audio frequencies sound… For those who never knew the joy of hearing a 2400 bps modem connect over a telephone line, it was a new concept!”

These concepts are central to electromagnetic maneuver warfare.

“We need to be able to have awareness of all threats and opportunities from [zero frequency] to light within an integrated system,” Hill said. “Our adversaries are looking at the entire spectrum to use against us, and we need to do the same. Having awareness of how the atmosphere changes from daylight to night and how that affects propagation of [high frequency] is important.”

This can be critical for young developers/engineers whose experience is typically limited to the UHF/EHF-based systems now in vogue across communications, guidance and ISR technologies.

Read the full story at
https://www.c4isrnet.com/electronic-warfare/2019/02/06/can-learning-ham-radio-make-for-better-engineers-and-software-developers/